By the end of this post, I promise to introduce the newest member of our family.


We've got the earlies going on in our house this week.

I'm working on a bit of a project, which currently has me setting my alarm for 6am every morning. Every morning. 6am.

And, weirdest thing of all: I'm liking it.

More on the whys and whats and who-are-you-and-what-have-you-done-with-Zoes later - it's still very much a work in progress.

Meanwhile. Besides starting every pre-dawn morning with mucho prayer (which is obviously working, because it's been six days and so far I haven't hated anyone for still being in bed), these are a couple of things that have helped:

Up in the dark, dress in the walk-in so the light doesn't disturb Liam (no small feat - it's not particularly spacious in there), tiptoe past the kids' room (because Ellie, who can sleep through a screaming brother earlier in the night, mysteriously develops super-hearing early in the morning), bit of time with the Lord, make breakfast.

And then, greet the day. 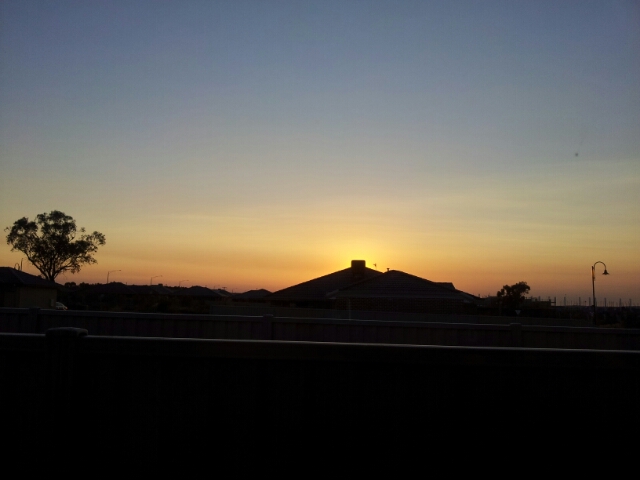 I need to clean my windows. 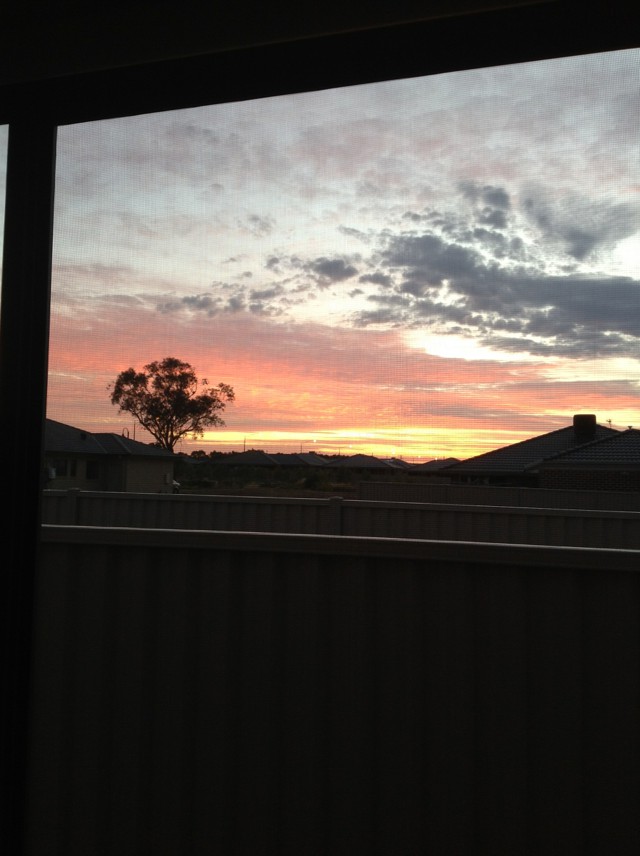 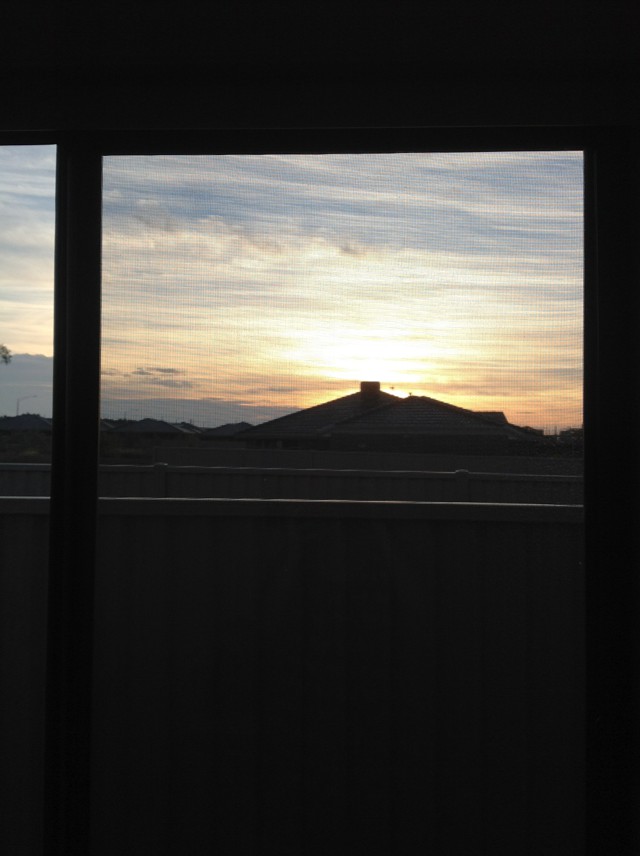 Okay, so it's not. It's water, infused with good stuff. It's detoxy and metabolism boosty. It tastes good and it feels good. And it's an awesome wake-up!

I read about it here (thanks, Pinterest) and decided to try it.

Basically, if you're like me and don't have the capacity to make a "gallon" of this stuff in one go, here's what you do:
Fill a two-litre jug with water.
Grab half a lemon or so, and about a half to a third of a cucumber.
Slice up all of the things.
Throw them (gently, you nutcase) into the water, along with a small handful of mint leaves.
Leave it in the fridge, and drink the water as your water for the day. (No, you don't have to drink the solids. Just leave them in there, all floaty-like.)
If you don't get through it all (dude! that was your two-litres-a-day! lift your game, son!), throw it away sometime tomorrow when the leaves are looking manky. 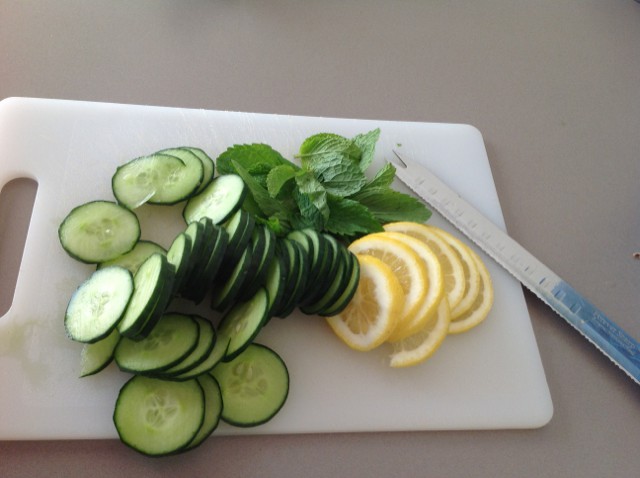 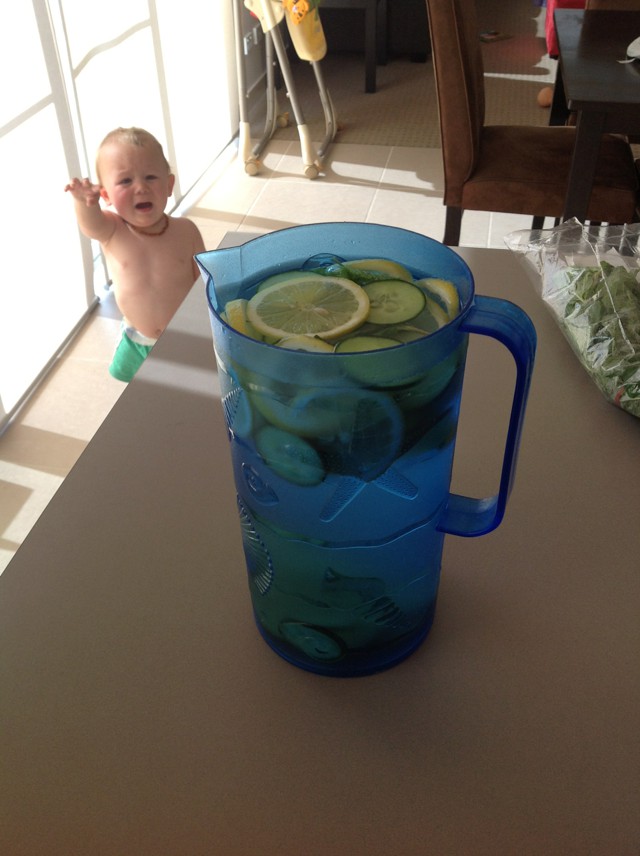 It's not an every day thing; I'm thinking I'll go with once a week. Bit of a boost, and a refreshing reminder that I'm doing healthy things. 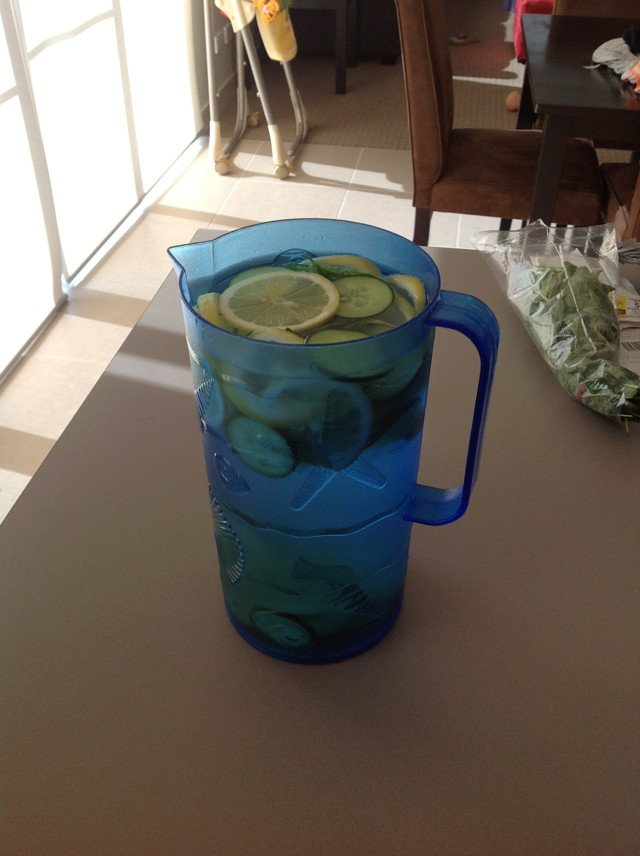 Much better. (He's dangling off my leg, but hey, he's outta the shot.)


And what am I doing with all this extra time and "zing"? 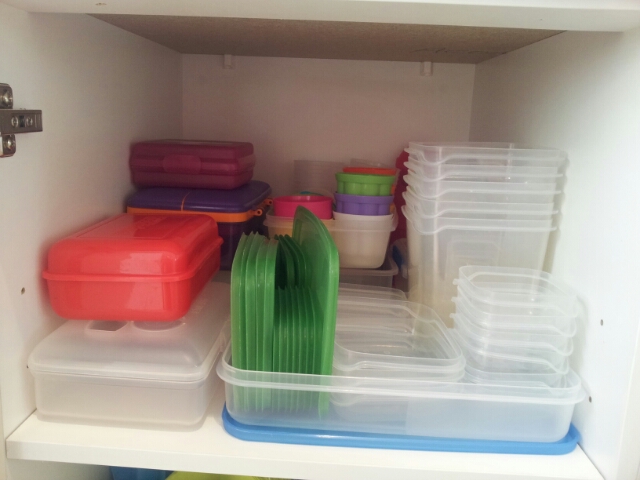 A nice, orderly containers cupboard fills me with something akin to joy...
Elation. Satisfaction.
Elatisfaction. 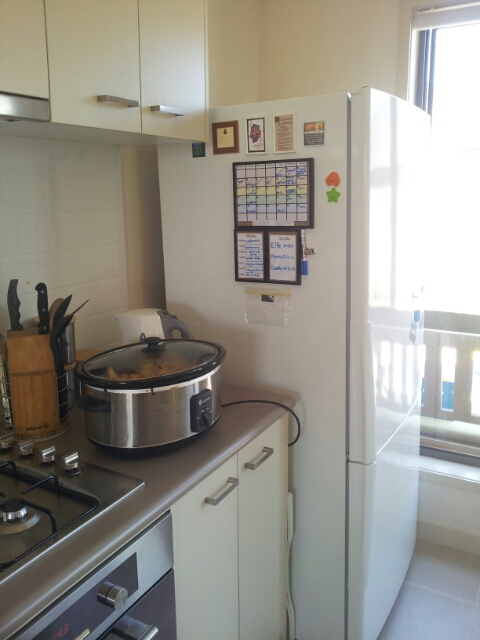 (Yeah, I just realised I said "family planning", and that's not what that means. Whatever.)

I was sure I'd posted about this stuff loooong ago, but scanning back though my blog can find no evidence of it. Did I? Anyone? Or is it just one of those things that hopped over from my mental "to do" list to my mental "done" list without asking?

Anyway, you're looking at our calendar, weekly meal plan, and notes board. Printed out, put in cheapo picture frames, magnets stuck on the back, and a whiteboard marker in a magnetted clip alongside. I've used these babies for a while, and looove it.

Also, magnet stuck on a plastic bag, for my "trolley dollar". Cos there's nothin' like getting to the shops with two arms full of baby and nappy bag and shopping bag and inevitable "I promise I'll carry it... Hey Mummy, can you hold this for me?" soft toy, and realising you don't have a coin for the trolley. Gahhhhhhh.

(This is where Aldi, with its trolley token that clips onto your keyring, is a bit genius.)

And yes indeed, that is a delicious roast chicken and its veggie friends hanging out in the slowcooker. And now I'm hungry. 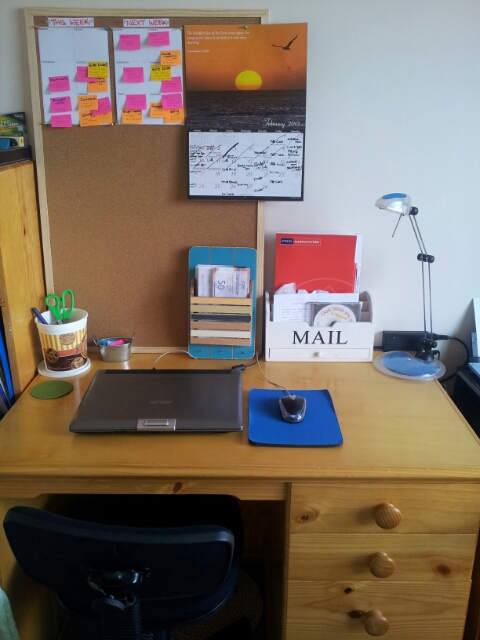 Not much to look at right now, but that was kinda the idea. It was a lot to look at beforehand - a lot of junk.

Now there's our mail sorting system, cookie dough container turned stationery holder, little tin of sticky notes, coaster for my cup of tea. And lamp and lappy, obviously. And on the corkboard is our two-week planner, with colour-coded sticky notes (pink is for Zoe, who clearly runs this joint) for events and reminders, and the calendar, which has been made slightly redundant but survives largely by virtue of its awesome picture-and-scripture combos.

"The steadfast love of the Lord never ceases, his mercy never comes to an end, it is new every morning."


Further Benefits of this Bright-and-Early Lark

When everything's organized by the time the kids are up and about their chaos-based business, it means there's more time in the day for cool stuff. Like my kids. 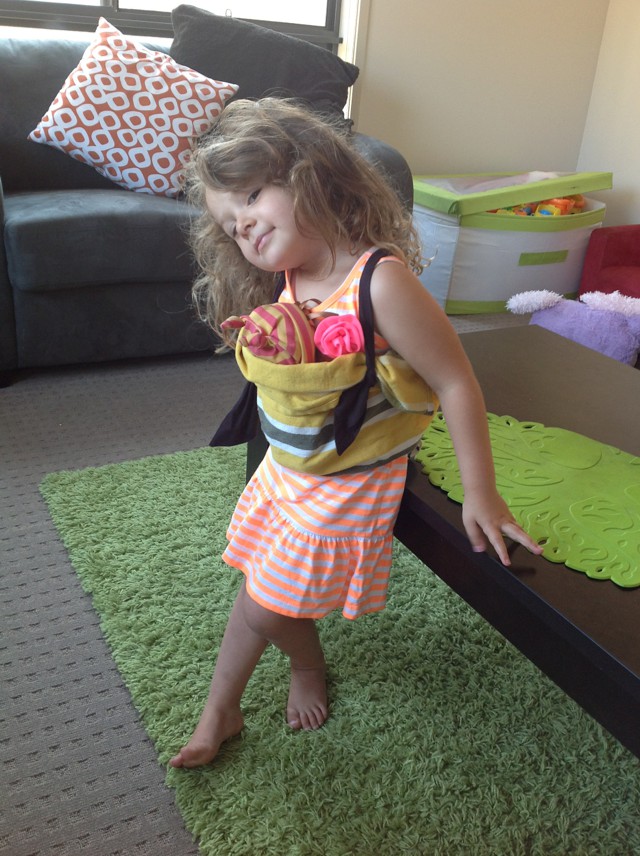 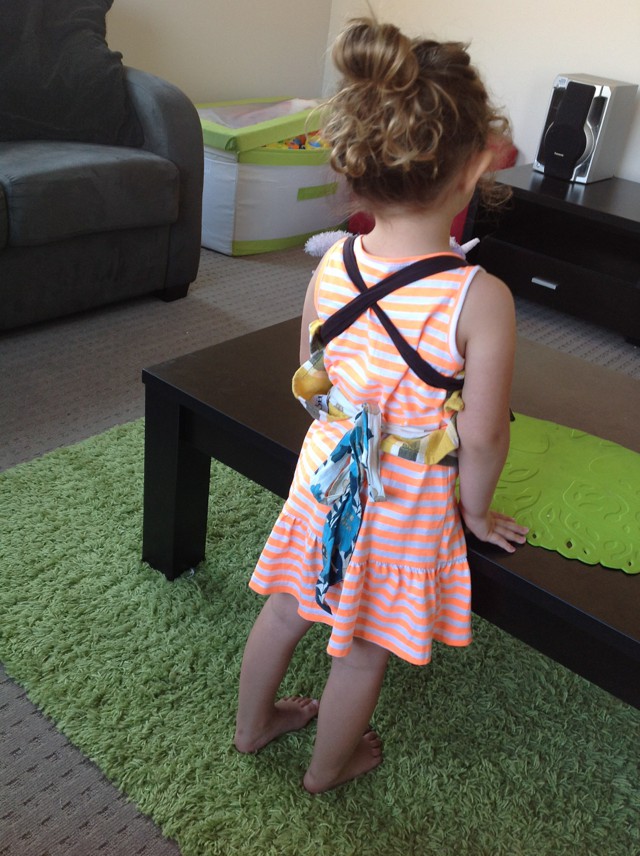 Also, that baby doll has a bell inside, which means one less person in this family who can sneak up on me and freak me out all of the time. (Yeah, I'm talkin' 'bout you, hobbit-footed husband.)

And they play together, like they aready were doing, but now I'm not busy still getting ready for the day. So I get to witness it, and soak in the loveliness. And so on. 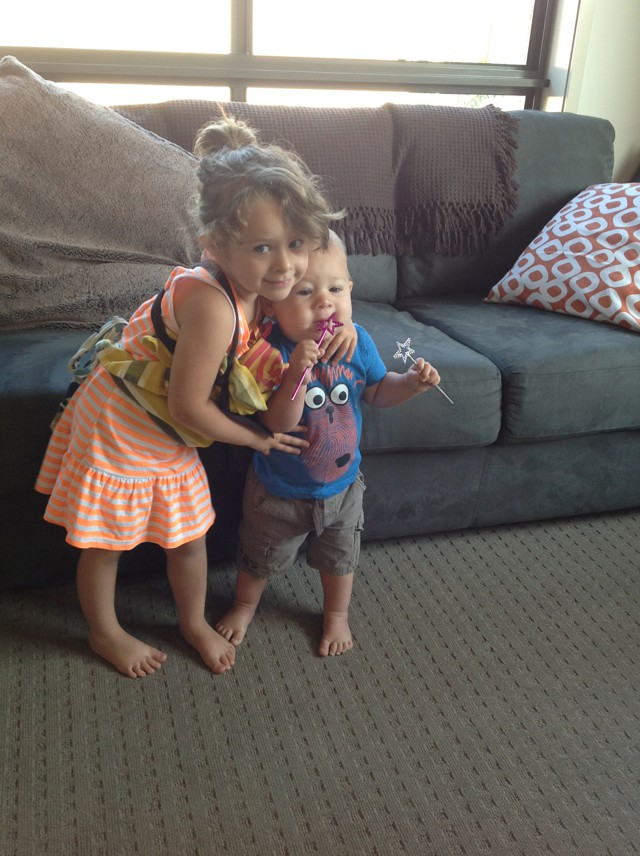 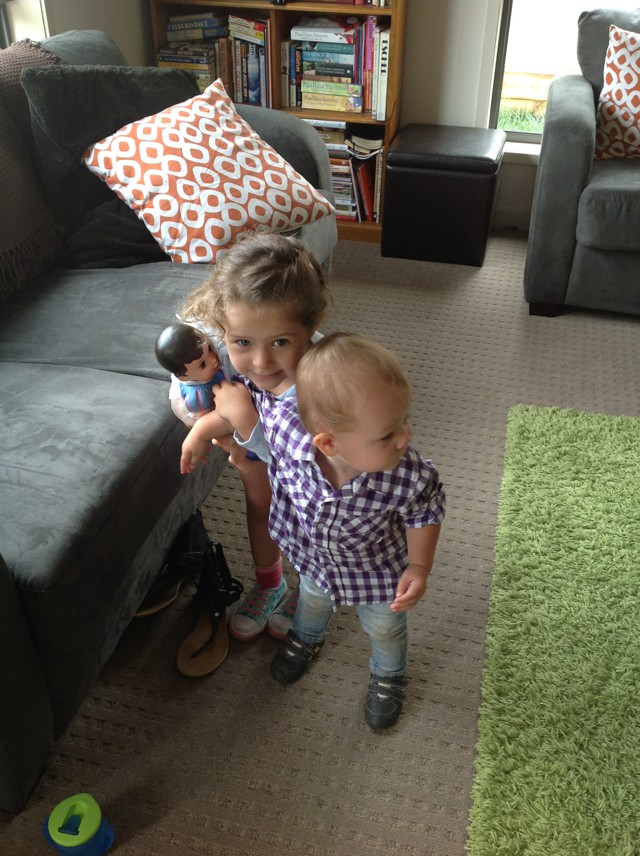 She desperately and constantly wants to hug him. He just wants to taste random items. 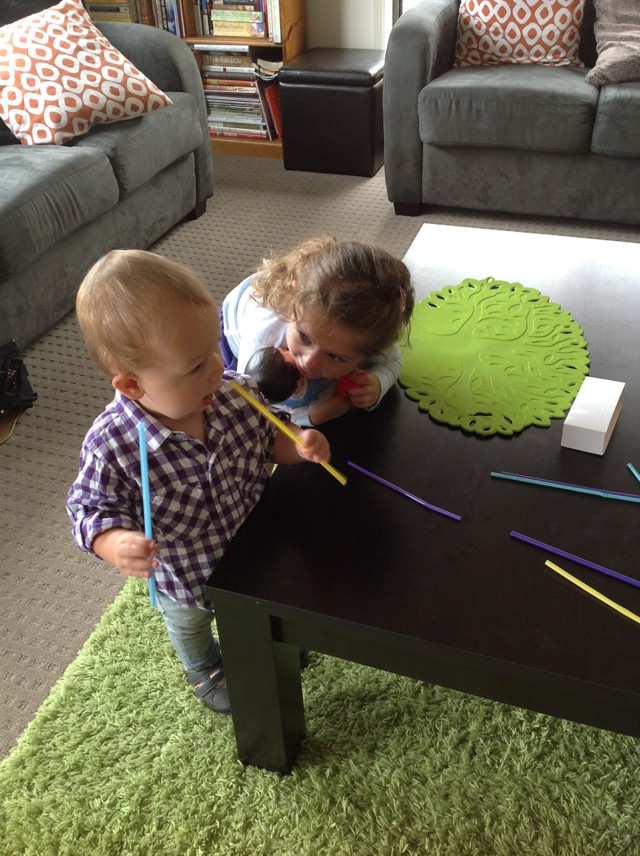 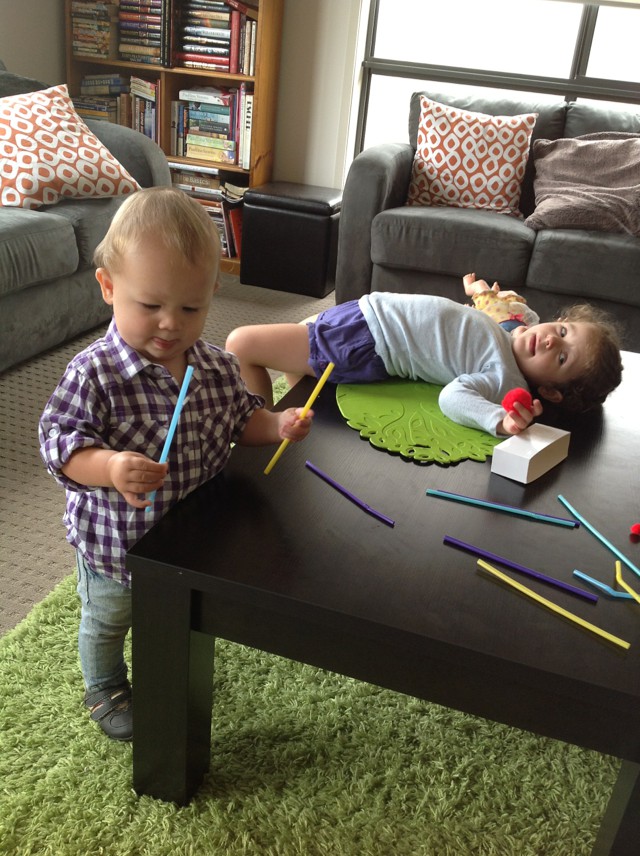 And finally, as promised: 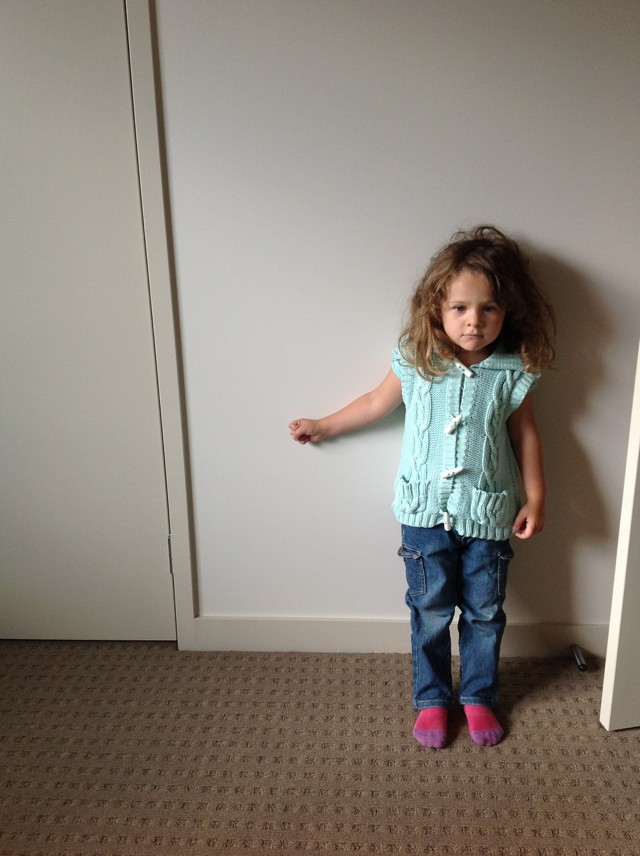 No, Leo's the one on the left of the picture. Holding Ellie's hand. Wait, can't you see her?

Leo suddenly appeared at the dinner table last night. Ellie had been very quiet, munching her way through her mushroom and barley (and chicken) "soup" and showering breadcrumbs all over her lap. Then I asked her to pass her bread plate, which was down the table off the other side of her placemat. After a long, vague pause on her part, I reached to get it myself.

Suddenly, she snapped to attention.

I asked if Leo was her friend.

"Yes," she said. "She's my best friend in the whole wide world."

Turns out Leo is three - just like Ellie is three!!! - and is invisible, and lives here now. She spent last night on Ellie's fold-out couch under the bunk. In Ellie's sleeping bag. I had to kiss her goodnight.

Sometimes, when Ellie's needing to feel a bit of superiority, Leo is only two.

Leo requires a place at the table. She doesn't need a real placemat or bowl - because she's pretend - but she does require Ellie to pull out a chair for her and help her up.

Leo goes to the toilet with Ellie, because she's still learning and Ellie is so good at teaching her. Leo frequently forgets to wash her hands.

Leo likes Nutella sandwiches the best. And when she doesn't eat them, that's okay, because Ellie does. 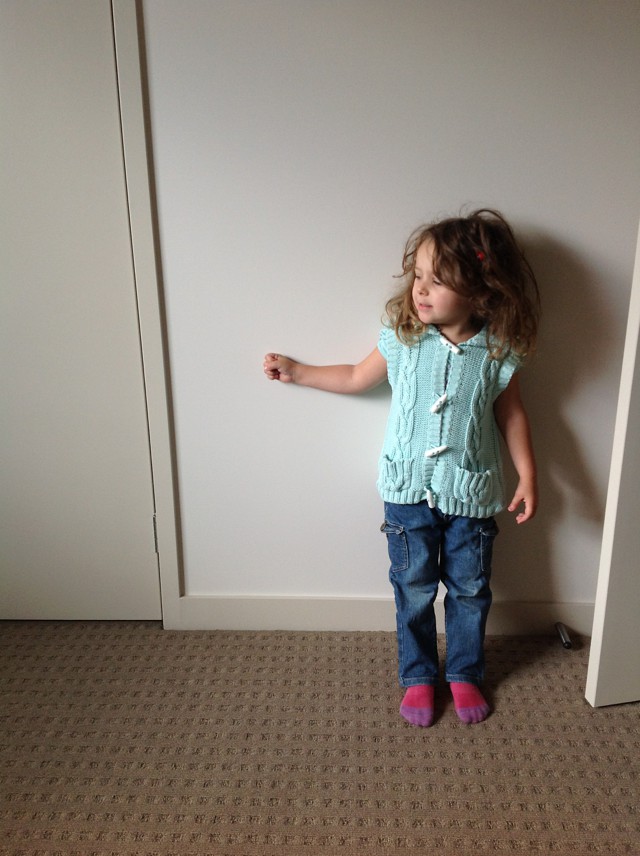 Leo needs to be prompted to smile for photos.

I love my daughter's imagination. I love her warnings against "fireboys", and her sudden desire to be a Mummy with a beard, and her notion that a fire engine is something that spits out fire. From the monster that lived behind her curtains when she was two to this latest house-guest, it's been an adventure to meet the procession of assorted oddness that a small child with a big imagination can bring to a home.

I'm enjoying asking her about Leo's opinions and preferences; watching while she carefully considers and then gives me new information about her friend with the utmost confidence. That moment when I see her come to a decision on some previously unexplored aspect of Leo's character is intoxicating for a writer-mama like me. And I think Ellie finds it deeply elatisfying. 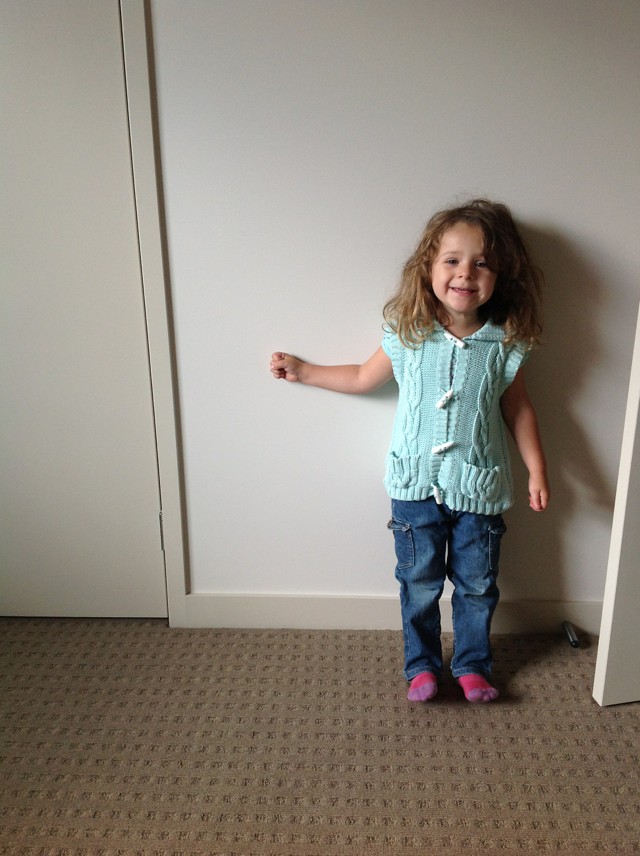 Welcome to our home, Leo.

Tags: enjoying life, getting organized, having a laugh, raising little people
Subscribe
Comments for this post were disabled by the author