Theo Doesn't Wanna Do That

Here's a nice photo of my children. Everybody in! Thanks, Owen - nice smile! Good team player there, Ellie! Um... hi Theo. In seven weeks and one day, Theodore Hurtado will be two years old.

Ellie was pretty fine as a toddler. Owen forgot to be Terrible until he hit three. Theo... well, Theo's been practicing. And he can stop practicing any time he likes. He's ready. 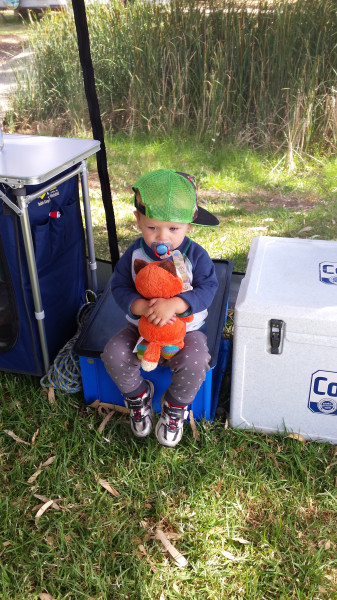 Oh, he's definitely still our laid-back one. Still content to do his own thing and sort himself out a lot of the time.

But when he's not...
When Theo ain't chillin', ain't nobody chillin', to quote absolutely no pop culture reference at all.

Some of his current themes include:
"MINE," or the more emphatic "MI-neh."
"Don' wannoo!"
"MY turn!"
"Dooon't!"
"I wan' EAT."
"Wan' go DIS way."
"Wan' 'po-LEEN!" (He's a trampoline-at-inconvenient-times addict).
"Wan' soos on!" (He's an other-shoes-when-he's-already-wearing-shoes-and-has-changed-shoes-fifteen-times-so-far-today-oh-my-goodness-say-shoes-again addict, also).
And "             ," a high-pitched shriek which cannot be read by human eyes but can DEFINITELY (and regrettably) be heard by human ears. All of the human ears in the land, probably.

Parents of toddlers live in a complex and contradictory world. We're SO PROUD of their new capabilities. But we desperately miss that helpless little bundle that used to stay where we put it and sleep through grocery shopping. We're SO EXCITED about the language explosion they're going through. But if we hear "No! Don' wannoo!" one more time, so help us...

It's all very awesome, watching a little bundle of mystery person turn into someone real and interesting, and I'm so appreciative of the opportunity I've been given to see this whole fascinating process three times over. But like all important things, it's not always easy.

They're starting to understand about choices, and about language. This means they're aware of the things they want to do or say but can't. It might be frustrating for us as parents (or innocent bystanders) - but it's even more frustrating for them.

But it's still PLENTY frustrating for us, thanks very much.

Parent-of-Toddler-hood - it's an honour, and a joy... and ever so tiring. 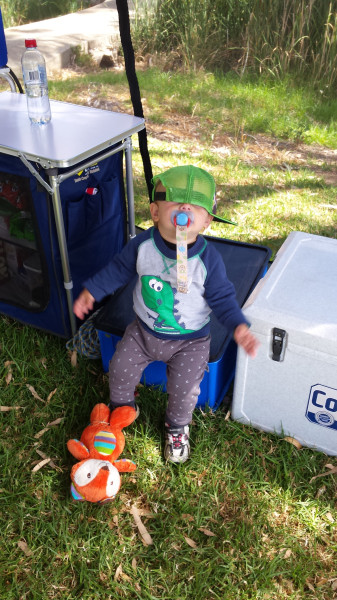 I've talked before about how they're not the only ones learning and growing - about the gifts of patience, and perspective, and knowledge of our own strength, and understanding of our need for the Lord, that this role gives. It's a defining time for all involved parties.

Let's remember that, when the toddler is turning into a chopstick to avoid being inserted into a trolley seat, or trying to run down the up escalator because "NO, I wan' go DIS way," or begging at the pantry door and then pushing away every snack on offer because we don't have the specific exact item they just thought of, or screaming like a banshee at the very IDEA of going to sleep at someone else's house, or in the wrong pyjamas, or at all.

Also, sometimes they come in handy. Like when they're the only other human in the house, and you just realized you're out of toilet paper. 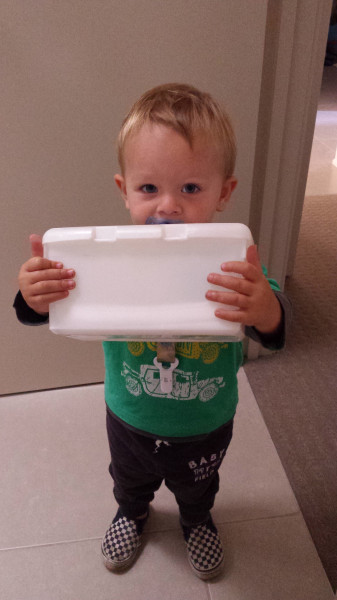 Oh, and also, he's SO sweet. And brave. And resourceful. And crack-us-up-every-dinnertime funny.

Honestly, my heart has never been so full.

He loves having "cuggles", and trying terrifying stunts, and putting on ridiculous outfits.

He stops to ask "You ah-kay?" when someone's sad, and makes hilarious faces when you least expect it, and bounces back immediately after falling on his head. Which happens a lot (see "terrifying stunts").

BUT he also wants to touch all the things he shouldn't be touching. And he wants the OTHER dwink. Not that one. No, not that one either. Actually no, the first one.

And he wants to go DIS way.

Obviously, God knew exactly what he was doing when he made toddlers cute.
Tags: raising little people
Subscribe
Comments for this post were disabled by the author